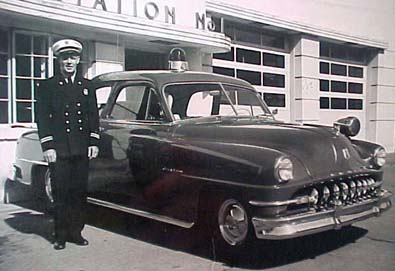 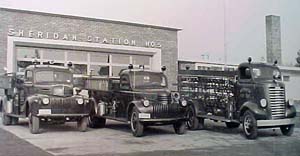 Department's Statistics
Many fire departments throughout the country have had wonderful records from an efficiency standpoint, and while the Bremerton Fire Department is not as large as some others in the state, the records show that the fire department, from its volunteer days up to the present, has had an excellent record of keeping down fire losses.
Statistics taken from department records show that the 1st volunteer fire department, known as "The Bucket Brigade", was organized in September of 1902, when Bremerton was only 9 years old. J.J. Murphy was elected to be the 1st fire chief. He was later succeeded as chief by Alexander Watt in 1907, who retained the post until 1914, when J. Humble assumed command in 1914 for 1 year. In 1915, Alexander Watt was almost unanimously elected chief at the special election held for chief of the fire department. He again retained his office until 1921, at which time he was succeeded by Chief Arthur Olsen, who was appointed by the mayor, M. E. Giles. This was the beginning of a paid fire department. Chief Olsen retained his position until February 15, 1922, when S. B. "Shippy" Lent was appointed chief by Mayor E. H. Bowdoin. 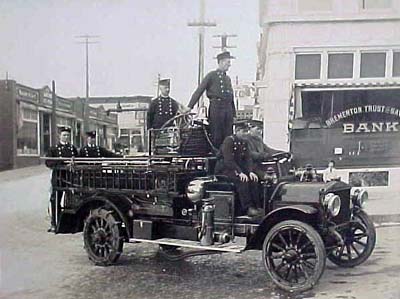 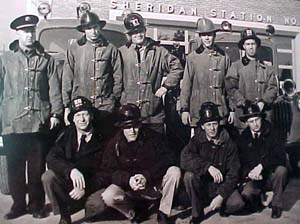 Chief Lent's History
Chief Lent had been a continuous Bremerton resident since leaving the U. S. Marine Corps in 1904. His connection with the Bremerton Fire Department didn't begin with his appointment as chief, but rather began with his original entry into the fire department back in 1907, a period of nearly twenty years. His efficiency record was sufficient to justify Mayors E. J. McCall, Frank L. White, and C. E. B. Oldham in retaining him in his position as chief. One of the important factors that Chief Lent had tried to impress upon the citizens of Bremerton, and which if followed out would decrease to a tremendous extent the likelihood of fires, and that is fire prevention.
Chief Lent retired in 1937, and Ernest Yett accepted the chief's job, 1 which he capably administered until his retirement on July 22, 1951. Ernest Yett was succeeded by Chief Ted Tillett in 1952 who remained as chief until August 1, 1970, culminating a 36-year career with the department.

Brief Chief's History
Upon the retirement of Chief Ted Tillett, Donald S. "Jack" Holtine took the reins as the fire chief. He held this position until his retirement on May 30, 1975 after serving for more than 28 years on the department.

Succeeding D. S. Holtine as chief was Max E. Meigs. Max became chief on June 30, 1975 and held the position until a tragic accident rendered him unable to continue with the fire department. He was granted a medical disability retirement on February 1, 1979. His brother Clarence V. "Bill" Meigs, who was the assistant chief, assumed the role of chief after civil service examination on March 15, 1979. "Bill" Meigs resigned from the Bremerton Fire Department on December 31, 1983 to take a position as Chief of the Kitsap County Fire District #7 Fire Department.

After "Bill" Meigs resigned, several upper level officers of the department took their turn as acting chief until a new permanent fire chief was finally hired on August 22, 1984. Leonard G. Marks became chief on that date. This is the 1st time in the paid history of the Bremerton Fire Department that a chief was selected from outside the ranks of the present department. Leonard Marks served until November 17, 1989 when he was granted a disability retirement due to health problems. Again, several upper level fire officers held the position of acting chief until a new fire chief could again be selected.