The Bremerton Police Department wishes to express its gratitude to Fredi Perry for granting permission to reprint the following section from her book Bremerton and Puget Sound Navy Yard (Fredi Perry, Perry Publishing 2002).

Before incorporation of Bremerton in 1901, law enforcement duties for the town were generally shared by the town and Kitsap County Sheriff's Department for civilian crime and naval authorities for military personnel. The sheriff's deputy assigned to Bremerton was Frank McMillan. Since there were no roads into Bremerton, Deputy McMillan relied on water transportation to get from his headquarters in Sidney (Port Orchard) to Bremerton.

By 1898, as the community was growing, criminal activity had also grown so that an on-site officer was needed. One hired law enforcement officer was "Gumpy" Hogan. This must have been a part-time position as Hogan's "day job" was as a clerk in Nibbe's Store. The year preceding incorporation, 1900, the constable was Haaken Sievertsen. 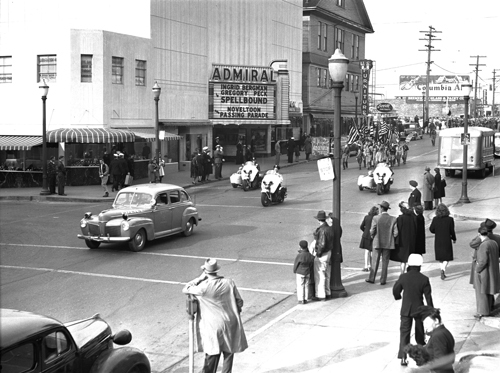 There are no records of serious crime in these early years and only when the Bremerton News began publishing in 1901 did we get a glimpse into the town's problems that included drunkenness, brawls, and prostitution. If an offender needed to be incarcerated, he would be locked up in a basement room of the Mertz Hotel. The rent was $3.00 per month. The Mertz was located on the southeast corner of First St. and Washington Ave. (In March 1911 it was dedicated as the home of the NYMCA.)

The Bremerton City Council minutes, dated October 16, 1901, read: "Applications for City Marshal from Joseph H. Green and Haaken Sievertsen read and laid over until next meeting. Police Judge to be acted on next meeting, scheduled October 19th."

The first appointed law enforcement official of the new City of Bremerton was "Fighting Joe Green". He served as marshal from October 1901 until he resigned the following July. He was paid $75.00 a month. During his term the city council authorized purchase of a revolver and blackjack used to keep order. His first assignments were to drain the lake that had flooded at Fourth St. between Pacific and Washington Avenues, and to tack up a measles quarantine sign.

The second marshal was Stephen Bunker who served from July 1902, until late in 1904. During this time the city hall building was erected near the southwest corner of Fourth St. and Pacific Ave. and a new multi-cell jail was built just to the west near the first Bremerton school. In1905, E. W. Taylor was hired as Marshal with W. A. Fritz as his deputy. They were each paid $60.00 per month. In March 1909, the city hall and jail were moved from Pacific Ave. to Fourth St. adjacent to the present city hall (239 4th St.). This jail was notable in that is was easy to escape. In 1909, an additional man was added to the force. R. R. Black was serving as Marshal with deputies T. H. Holmes and M. Schnee.

Later in the year Herman D. Renn was appointed Marshal at a monthly salary of $75.00 a month. By this time the Marshal was being called Chief of Police.

When Renn served on the force, the police station was near the corner of Fourth St. and Pacific Ave. His force consisted of Frank Reynolds, Honerbrook, Chase and Arthur Peterson (who in 1951 became Chief of Immigration in Seattle.) Peterson had the only motorcycle in town.

Another officer was "Tail Light" Green who earned his nickname for his vigilance in checking the taillights of the 2 cars in town owned by Dr. E. J. Taggart and Fire Chief Humble. In March 1911, the mayor recommended that a police matron be hired at $60.00 per month. The city council rejected the proposal then, and again in March 1913.

There was a power struggle between Mayor Cady and the city council in January 1914. The council created a police committee to oversee the police department. Members Charles Worth, George F. Ward and J. A. McGillivray appointed Jack Walker as chief and the former chief, Gibson, resigned.

Recalling the hardships of his night patrol in the early days, Herman Renn wrote: "We would flat foot it all over the city during the night, either Cal Black and I, or Patrolman Gibson. Our duties meant making arrests for drunk and disorderly conduct among civilians. We would walk into saloons, arrest those out of order and put them on the pushcart which served as a paddy wagon. If one of the better known civilian personalities of Bremerton was found in disorderly condition, we would put him on the pushcart, but instead of jail, the person would be deposited at his home. We'd even take a man home and put him to bed if necessary."

Up until WWI, the police chief's job was akin to musical chairs. Every time a new mayor would be placed in office, a new chief was appointed.

Following is a reconstruction of those men who headed the police department in the early years with approximate dates as abstracted from various records, and includes the mayor who most likely appointed him.


Frank Reynolds was appointed in 1920, but resigned when he was involved in an extortion trial. James W. Tribble served for more than 2 years on the Manila (The Philippines) Police Force and came to Bremerton in 1915 to work as a leading man in public works, PSNY. He was appointed chief in 1930 and served 7 years, then was replaced by Charles (Slats) Lewis. It was at this time that the Bremerton Police Department entered the Civil Service System.

The city has had 14 marshals and 29 police chiefs since those early days. Each succeeding decade produced innovative programs to assist and serve the community. The 1930s saw the department begin the Junior Safety Patrol at all school grade levels for traffic safety education. The 1950s brought in the Junior Safety Division (juveniles) for the prevention of delinquency - very similar to today's School Resource and D.A.R.E. officers and DUI Task Force Coordinator roles. During the fifties, the department checked the loyalty of applicants for federal government jobs and firms holding government contracts. The department began marking hubcaps that reduced theft by 50%. In 1958, the force had 43 patrolmen, 2 policewomen, 1 pound master, 1 police clerk, 1 stenographer, 12 cars, 9 motorcycles and a $100 uniform allowance. That same year, the city jail served 3,050 meals at a cost of $2300.90 through a contract with a local restaurant. Bibles and other reading material were provided to prisoners to help educate and keep their minds occupied. Also that year 6,627 reports were written.
The Legendary Art Morken
Bremerton's most famous cop, Arthur Norman Morken (1909-1986), joined the force in 1934. He served as a lifeguard at Lion's Beach on Kitsap Lake for 3 years saving a total of 68 lives, the Bremerton Searchlight reported. He held a first aid and life saving examiner's certificate. His high school days were filled with athletics and he received letters in track and football and was coach for the Kuett's girls' basketball team. He worked as a "sand hog: in construction of a dry dock tunnel at PSNY, was a commercial sign painter, and was appointed a traffic officer in 1934, as the youngest member of the force. In 1937 he became a sergeant, then a lieutenant in 1938, and captain in 1941. He served as acting chief in 1942 when "Slats" Lewis went into the Navy. 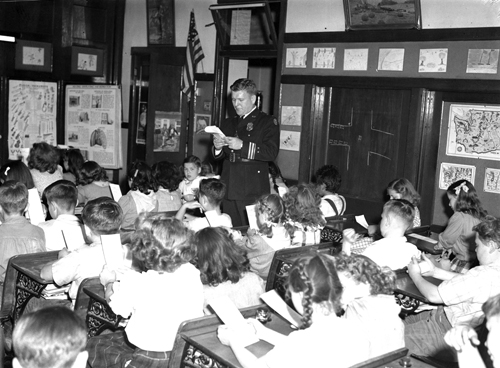 During WWII, the police department grew from 18 to 70 officers. He became the permanent chief in 1961 when Lewis retired and the following year Morken ran for and was elected as Kitsap County Sheriff until his retirement in 1979 at age 69. He started Bremerton's School Boy Patrol program.

On April 27, 2007, the Bremerton Police Department moved to its modern new headquarters located at 1025 Burwell St. The building was dedicated as the Art Morken Building in his memory.

Chiefs of the Bremerton Police Department - the Complete List