City Facts
The City of Bremerton is situated approximately 20 miles west of Seattle, on the Kitsap Peninsula. The elevation ranges from sea level to 565 feet. The city is separated into 2 physical regions by a saltwater channel, the Port Washington Narrows. Two vehicle bridges connect these areas.

In 1990, Bremerton was proclaimed "the most livable city in the United States" by Money magazine. It is the home of Puget Sound Naval Shipyard, the 2nd largest employer in the Northwest. (Seattle's Boeing aircraft plant in the largest.) PSNS employs about 9,500 people. 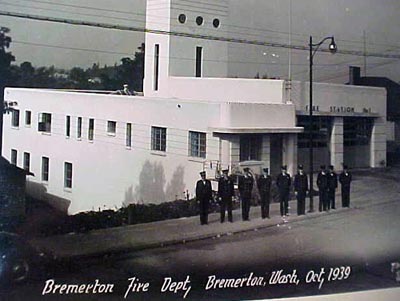 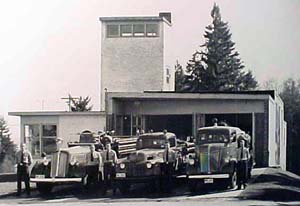 Bremerton has a moderate climate, with temperatures ranging form the mid-70s in the summer to the low 40s in the winter. Rainfall is approximately 50 inches per year. The city is in a region with a major earthquake fault.

Fire Department History
Bremerton's Fire Department was established in 1902. Its 1st hand operated fire cart arrived on December 20, 1902. A fire Abel was installed in 1904. Mounted in a tower, the 595-pound bell called out firefighters and citizens alike. Before the bell arrived, the alert had been delivered by firing gunshots in the air.
The Bremerton Fire Department hired its first 6 paid firefighters in 1921, after it was discovered that many of the volunteers were loaning equipment to citizens, removing it from circulation for fire department use. The fire department had as many as 80 firefighters during World War II. Since 1902, there have been 13 chiefs.

Today, Bremerton operates the only public full-time paid fire department in Kitsap County. The only other full-time paid departments are the Puget Sound Naval Shipyard, which is federal and Bangor Submarine Base, which is private.
Notify Me®
Projects
Online Payments
Employment
Online Services