City of Bremerton Water - Serving Our Customers for more than 100 Years!

From a Visionary Past, to an Inspired Future

The growth and prosperity of a city is dependent on a high quality water supply, good roads and bridges, and responsible environmental and fiscal management. The history of the City of Bremerton's Public Works and Utilities Department is uniquely aligned with the history of the city itself, reflecting the development of a diverse, proud and hardworking town.

The first settlement in the area was made by Captain William Renton in the vicinity now known as Manette in 1863. Later, the Navy sent Lt. A. Wyckoff to the area to locate a site for a navy yard. On December 10, 1891, William Bremer platted the town of Bremerton. Shortly after, the federal government purchased land from Bremer and other landholders for what would later become the site of the Puget Sound Naval Shipyard. Another town, Charleston, was located directly to the west of Bremerton on the west side of what is now known as High Avenue.

When the town of Bremerton was incorporated on October 16, 1901, the population was approximately 1,000. Drinking water came from local wells and springs, and wastewater and stormwater drained directly into Puget Sound. Gravel was used on major thoroughfares; most roads were made of native material, which turned to mud in the rain. Some roads were lined with logs like skid roads, but the primary method for travel throughout the region was along the waters of Puget Sound using boats of the mosquito fleet. 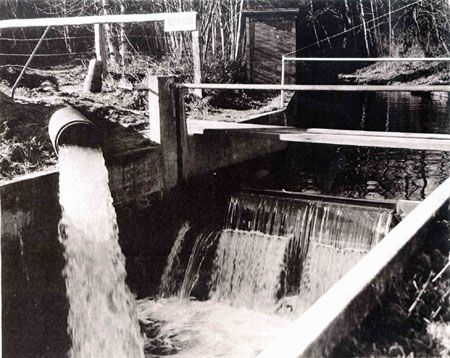 A Foundation Begins
In 1902, a private company began diverting water from Anderson and Charleston Creeks. In 1917, the City of Bremerton purchased the water system, which included 600 acres of watershed land and 2 million gallons per day of surface water, for a mere $225,000. Purchase of the Union River watershed lands began in the 1920s and continued into the early 1990s. Also in the 1920s, improvements to the water system included replacing the wood distribution system with iron pipes.

In December of 1927, residents voted to combine the town of Charleston with Bremerton. The first paved roads were installed in the downtown core using red bricks over a shallow layer of concrete. Some of these original bricks are still in place, however, they have been overlaid with asphalt. Many of the paved streets were installed during the Depression by the Works Progress Association and some of the plaques commemorating this are still in place.

On June 21, 1930, the Manette Bridge was dedicated. It had a wooden driving deck and was replaced by an all steel structure in 1949. After over 60 years of service, construction on the Manette Bridge replacement began in 2010 and is scheduled to conclude in 2012. In 1958, the Warren Avenue Bridge was completed. Additional toll booths were installed on the Manette bridge as well, so people traveling on either bridge were required to pay a toll. 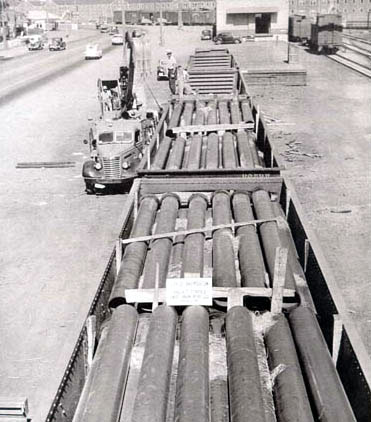 In the early 1920s, approximately 2,200 acres of land were acquired by the city around the Union River and Gorst Creek drainages for which water rights were filed.

In 1938, a fire swept through the mostly logged off land in the upper Union River drainage. It took 2 weeks and the efforts of large crews and equipment to bring the fire under control. Both natural seeding and hand planting of seedlings contributed to the reforestation of this area. The Water Utility's Forestry division continues to plant approximately 30,000 trees annually to reforest harvested areas and natural stands that would benefit from greater tree cover. The Water Utility derives income from the harvest of second growth timber to support capital improvements within the water system.

Demands of a Swelling Population

With the onset of World War II, the population of Bremerton increased from 10,000 to 80,000 in just a few years, dramatically increasing the demand for water and other public works services. Wells were drilled near Anderson Creek to supplement the water supply. This aquifer continues to be an important groundwater source for Bremerton.

In the 1950s, the Union River became more fully developed as a reliable water supply. Because of its elevation, water could be delivered by gravity, thus saving power costs. Construction of Casad Dam began in 1955. The dam was named after water superintendent C.C. Casad, who worked in Bremerton's Public Works for over 40 years. The reservoir can hold 1.4 billion gallons of water, and Bremerton now owns and protects 98% of the 3,000 acre watershed. The Water Utility continues to acquire lands that protect and support our water supply in the Union River watershed. The water quality and management of this surface source is so exceptional that Bremerton is one of only a few surface suppliers in the country not required to build a water filtration plant.
Prior to the passing of the Clean Water Act in 1972, it was thought that combining wastewater and stormwater was an efficient, cost saving method. However, when heavy rains overwhelmed the combined sewer system, overflows were discharged into Sinclair and Dyes Inlets without treatment. By the early 1990s, Bremerton embarked on an aggressive overhaul of the sewer system, which resulted in separated sewers and an award-winning wet weather treatment plant at the site of Bremerton's first wastewater treatment plant. This 17-year, $54 million project put Bremerton in full compliance with strict environmental standards and the City was recognized as a "Puget Sound Champion" for these efforts.

"He Dreamed Nobly - He Built Well"

The history of the Bremerton water system was also the life story of C.C. Casad. Mr. Casad first worked for the City of Bremerton as a seasonal surveyor in the summer of 1905. He became City Engineer in 1921. In 1924, he was elected Commissioner of Public Works and Utilities. From 1924 to 1943 he also filled the positions of City Engineer and Water Superintendent, as well as Public Works Commissioner. From 1943 until his death in 1958, Casad was the city's Water Superintendent. The water system as it exists today is a monument to his planning and perseverance, in addition to his genius as a builder.

Kitsap: Our Water Through History from BKAT TV on Vimeo. 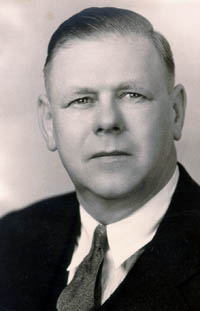